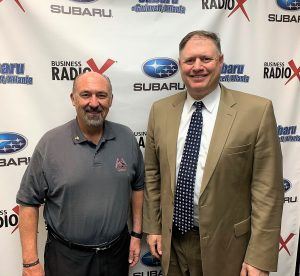 Todd knew early on he wanted to go into engineering as a career choice based on liking maps and studying traffic. After graduating from Georgia Tech in engineering, he worked for the Georgia Department of Transportation for many years until his "retirement." He served as a district engineering for Georgia for a few years. After a three-year stretch working for Fulton County, he began his next career chapter as a consultant with Moreland Altobelli (An Atlas Company).

Todd and Rick talk about traffic and mass transit issues in Gwinnett County. There already exists mass transit and it's well managed. Light rail offers some advantages. It's an ongoing issue, but it will likely be coming up as a public discussion again soon. Todd lives in Gwinnett so he knows what a great place it is to live. They talked about why transportation issues can also represent why people want to live in an area and companies want to do business in a community - both positive points.

Atlas is a world-class organization of over 3,200 professionals in 40 states dedicated to creating lasting infrastructure. Atlas is uniquely connected to the communities they serve. Their services have grown to include everything from testing, inspection and consulting to engineering planning and design. Listen to the podcast now.